John Zulli is the author of the popular book, The Mind Rules- Master the three powerful principles that rule your performance, success and happiness (Red Horse Press, Inc., ISBN 0-9752867-0-6) and a prolific writer of non-fiction.

He has written numerous articles for publications and has developed dozens of DVD and audio programs on peak performance and personal growth. As a ghost-writer John has helped celebrities and speakers in the self-help industry to transform their ideas into ink.

Since his first day as a speaker John Zulli has created his own material and authored scores of training programs on topics ranging from stress management and workplace violence to emotional intelligence and strategic thinking.

Most proudly, John has developed several certification courses which were approved both by the State of California Council for Private and Post-Secondary Education and the State of Nevada Department of Education. 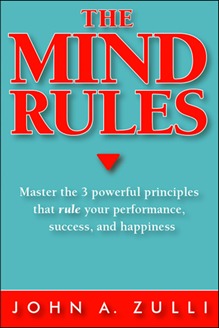 The Mind Rules: Chapter 14The Tale of Two Wolves

The young chief went to see the elder medicine man and told him, “"a terrible fight is going on inside me and it is between two wolves.” One is the wolf of arrogance, anger and greed. The other is the wolf of compassion, peace and benevolence. Can you tell me which wolf will win?”

“Yes,” replied the holy man, “The wolf who wins will be the one that you feed.”

Research in the field of psychobiology suggests that you may have up to 60,000 thoughts throughout the course of a single day. Unfortunately, the same research also indicates that nearly 90 percent of those 60,000 thoughts are the exact thoughts that you had yesterday, and the day before that, and the day before that. In other words, a tremendous amount of attention is centered on a relatively small nucleus of ideas. These dense concentrations of thought generally have a theme that can be classified under one of two broad headings. The first wolf might be called “life-affirming” because it is the wolf of possibility. These are the thoughts, emotions, and behaviors that are proactive, encourage creativity, and promote life. The second wolf is “life-negating.” This wolf is made up of the thoughts, sensations, and actions that work against growth, restrict creativity and flow, or terminate life.

This life-negating wolf does have its place. Weeds in the garden need pulling. War must sometimes be waged. Skepticism can be healthy when dealing with people who have their own interests foremost in mind. But feed the wolf of pessimism the lion’s share of your thoughts and all you will get back is chronic stress, fear, and stilted performance. The struggling salesperson who focuses on bad news about the economy or his company is no different than the rock climber whose attention is consumed with ideas and images of falling, pain, and death. Too much attention to the problem creates mental and physical paralysis and overloads the body with emotional energy. The only way out of the dead-end alley of negative focus is in redirecting attention to where you want it to go. Patients with cancer or heart problems must face the life-negating wolf that comes in the form of their diagnosis, but they must switch their attention to the life-affirming wolf when it comes to the prognosis. And the battle cry of the life-affirming wolf is, “I can!”

A Carnegie-Mellon/University of Miami study showed that the coronary bypass surgery patients who recovered the quickest, with the least complications, were the patients who approached their recovery in a “directed, goal-orientated way.” These patients participated in their recovery as opposed to merely observing the process. They sought information on what they could do to help themselves heal, took action and even made plans for when they would be released from the hospital.

Like the salesman, the rock climber, and the cancer patient, you must acknowledge the wolf of the worst-case-scenario so that you can assess the real gravity and consequences of your situation, but to transduce power you must quickly shift your attention to what you want, your strategy for getting it, and the resources at your disposal. To overcome adversity or to elevate your game you must seek out and feed the wolf of opportunity. Start by directing your attention to your assets, choices, and support systems. Read the biographies of the courageous and study the stories of their success.

The evening of September 11th 2001, I had had enough of the television coverage of the terrorist attack and the aftermath of the tragedy. All day my focus of attention was exactly were it should have been: assessing the threat to myself, my family, and my country. I turned off CNN and took my attention out to my office. With the desk lamp turned down low, I sat in the half light and listened to the most poignant and rousing speeches I could find on the Internet, talks that were given by great men in times of peril and uncertainty. Through the voices, words, and wisdom of Churchill, Kennedy, and Roosevelt, I gained perspective, courage, and power. Others had been here. We would rise to the challenge. We would prevail. In the confusing days that followed I kept my eye on the conflict that dominated the headlines, but I also looked to history; to that torch of freedom that had now been passed to a new generation of Americans, and in that information I found strength, clarity, and meaning.

Which wolf will you feed today?